Following the company news No. 01/11 here’s an update on the situation concerning the biphenyl.

As already illustrated in the previous communication, immediately sensing the urgency of the case and the dramatic consequences that there could have been, Webb James Srl financed on its own initiative a scientific research, in an attempt to clarify the origin of the biphenyl found in nutmegs and maces. The first conclusions, attached to the present informative report, make it almost sure that the origin of this substance can have an endogenous origin.

The report of the research was promptly sent to the Italian Authority thanks to the AIIPA, and also,  thanks to the activity of the ESA, was made available to the delegates of some foreign countries interested in the first person from the problem. They managed to insert the biphenyl issue on the agenda of the “Standing Committee on the Food Chain and Animal Health” Meeting, which was scheduled for the 3rd and the 4th of February 2011 in Brussels.

We would like to make our customers aware of the conclusions of the aforementioned research, initially used for institutional purposes only.

According to the National Delegates and the ESA, during the Meeting held a few days ago the Commission, taking also into account the scientific evidence presented by the Delegates, is well aware of the real difficulty that has arisen, partly also because of the increasingly evident inadequacy of the legislative framework regarding pesticide residues.

On the one hand, in fact, the approval in December of SANCO Draft No. 12828/2010 (Rev. 2) will inevitably continue existing. On the other hand, the limits that will come into force will be absolutely inadequate for nutmeg and mace. Furthermore, it is the firm belief of all that biphenyl, considering the quantities in which is present and the presumable intake with the diet, does not represent any risk to human health (1).

If the Commission were to follow the procedure for the revision of an MRL, it would take between one and two years – with the creation of a paradoxical situation. In order to avoid this, in an attempt to resolve the matter at least temporarily, the Commission decided to follow a more rapid path, in any case in line with the provisions of the current pesticide legislation.

Essentially, as already communicated by the ESA through the CL 09/11 newsletter of the 7th of February, the German Government has launched a procedure for requesting temporary national limits, using the provisions of Article 18, paragraph 4 of the Regulation (EC ) No. 396/2005 for exceptional circumstances. The German BVL (Federal Office of Consumer Protection and Food Safety) will carry out a new risk evaluation based on data provided by the European Spice Association, which will lead to the definition of national limits in about six weeks.

These temporary limits will be notified by Germany to the Commission, and by the latter to all Member States, which should implement in a very short time a similar procedure based on Germany’s work. In this way the expected scenario should lead to the definition of a temporary biphenyl limit for nutmeg and mace, compatibly with the publication of the SANCO Draft expected probably in May.

The need, well felt by the Commission, to review the procedures envisaged for the revision of MRLs with a view to efficiency and maximum speed remains strong. In the current state of affairs, the difficulty of responding quickly to the various problems encountered in the various product sectors involved in the problem of pesticide residues is evident.

In light of what has been communicated, Webb James Srl deems it advisable to inform its customers about the unavoidable presence of biphenyl in marketed nutmeg and mace. It is therefore necessary to any Customer, as a professional food operator, to evaluate the opportunity in the use of such products, taking into account that no concrete risk seems to prefigure itself for the health of the Consumer.

In the event that there is no awareness and explicit acceptance by the customer of the contingent situation, any contract in place will be considered resolved due to force majeure, independent from Our will.

(1) Recall that in EFSA’s reasoned opinion “Modification of the existing MRLs for biphenyl in various commodities” of October 2010, at point 2 reference is made to a tolerable daily intake of biphenyl equal to 0.038 mg per kilogram of weight body (WHO, 1999), which corresponds to a value of 2.66 mg for a person weighing 70 kg. Even assuming that nutmeg and mace have a content of this substance equal to 1 mg / kg, therefore exceptionally high, a person of 70 kg could eat up to 2.5 kg a day of nutmeg and mace while remaining within the limit of intake deemed acceptable to health. 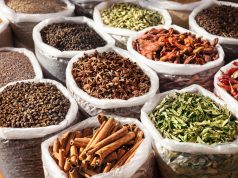 Curiosity: where does pepper come from? 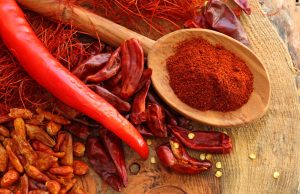